Slowly Changing Dimensions (SCDs) refers to the process of tracking and analyzing attribute relationship that change over time. For example, a retail company has numerous stores that are assigned to various managers. The sales organization hierarchy in their data model is structured as follows :

Although the relationships between districts, regions and managers do not change over time, the managers assigned to store change as they are reassigned or as they enter or leave the company. 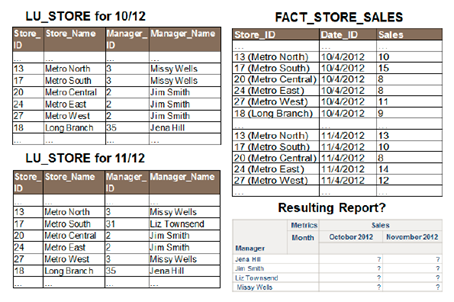 SCDs is also referred to  as versioning in MicroStrategy.

Although SCDs are well documented in the data warehousing literature; there are different terminologies used to distinguish the different types of SCDs. In this lesson we will discuss four types of SCDs, they are : 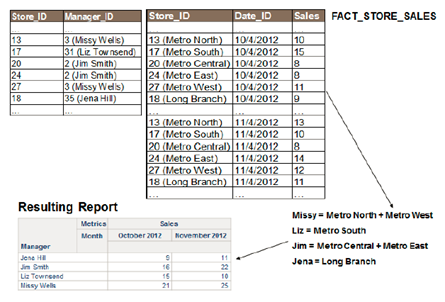 Notice that for Missy and Jim, the sales for October are for the only the stores they manage as of November. For Liz even though did not start as an employee untill November, she has sales for October.

As Is vs. As Was (Type 2) involves analyzing all data in accordance with the attribute relationships as they exist currently and as they existed historically. You aggregate and qualify data based on the values in the lookup and relationship tables that correspond to the desired timeframe. If aggregate tables exists, the logic behind how the values roll up may differ based on the time period that you query. 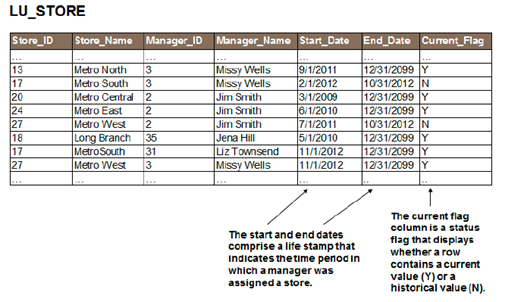 As the manager-store relationships change over time, there will be multiple records not only to map managers to their current stores, but also to map them to every store to which they were previously assigned. You can store these relationships in a single lookup table along with data range values and flags that indicate the time period when a particular relationship existed. 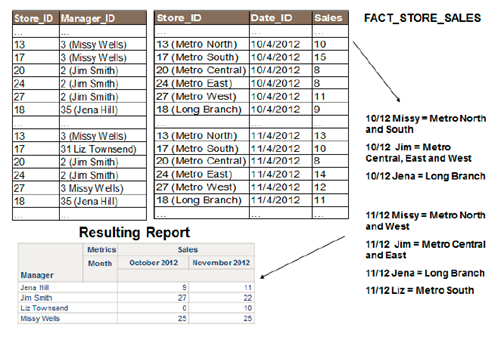 Since Liz did not start as a manager until November, she does not have any sales number for October.

#Like vs. Like
Like vs. Like, also referred to as comparable analysis, involves analyzing only data records that exist and are identical for the querying time period. In other words, only data relationships that have not changed over time are included in the result set. Similar to the As Is vs. As Was or Type 2 SCDs, the schema preserves both the historical and current relationships. As a result, when you run a report to aggregate the total sales for each manager, only data that exists unchanged are part of the final result set. 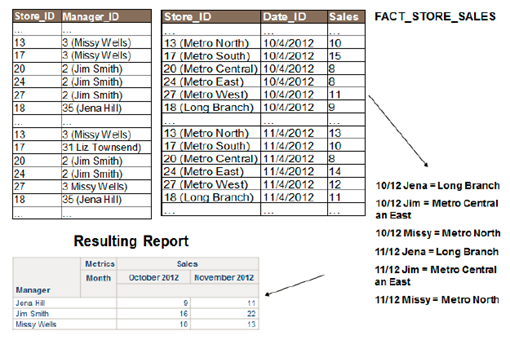 As Was vs. As Was involves analyzing data only in accordance with the attribute relationships as the existed historically. Similar to the As Is vs. As Was or Type 2 SCDs, the schema preserves both the historical and current relationships. With this type of analysis, however, you reference only historical relationships in queries. As a result, when you run a report to aggregate the sales for each manager, the fact table rolls up  the store sales to which the manager was historically assigned, not the store that they are currently assigned. 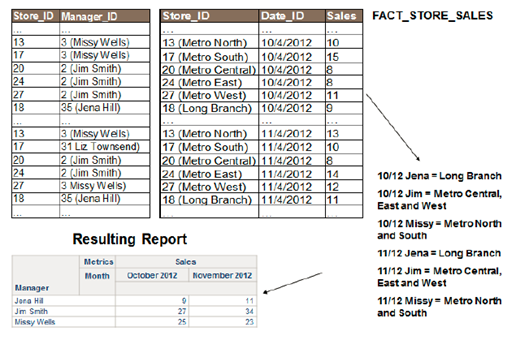 #Summary of Four Types of SCDs

Each of these types of analysis returns a different result set when querying the same data. 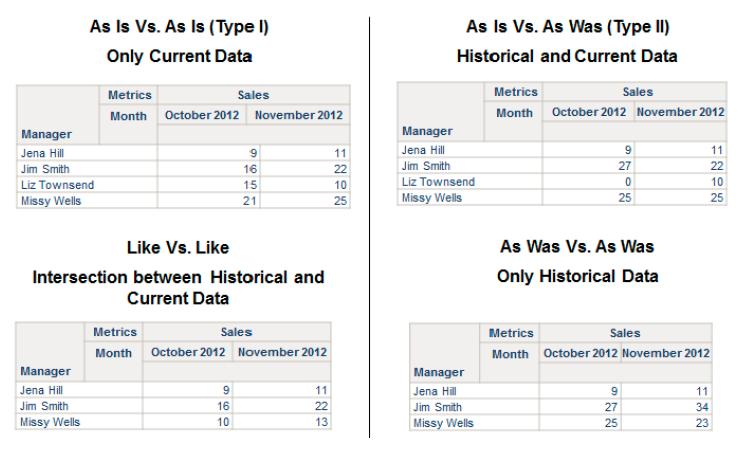 You can implement SCDs by :

1. Creating a life stamp.
With a life stamp solution, yo include a start date and end date in the lookup table that indicate the time period for which specific records are valid. When you run reports, you can then use filters with the appropriate date ranges  to determine how data is aggregated. 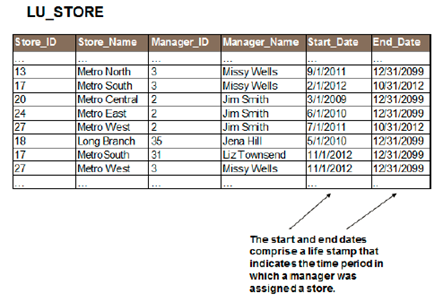 Notes :
The current_Flag column in the LU_Store table indicates whether each record in the table contains a current value (Y) or historical value (N). You can easily perform As Is vs. As Is (Type 1) analysis on this table by simply filtering on the Current Flag being set to “Y”.

Implementing SCDs using life stamp requires a time filter, you either have to create all of the appropriate filters and prompt users on which one to select for a particular query, or users have to understand the data well enough to create their own filters.

My Notes :
MSTR is not support theta join, so users must use filters or flag on their own report.
These are joins where the evaluation condition is something other than equals (=).  Since a traditional implementation may require a "join between", this eliminates a lot of options. (Bryan Brandow)

My Notes :
This method can only contain 1 historical attribute. I think it’s similar with Type 3 or Type 4 of SCD‘s Approach. So I won’t recommend it. 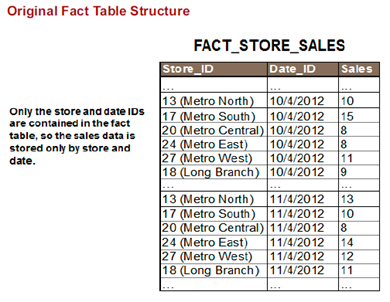 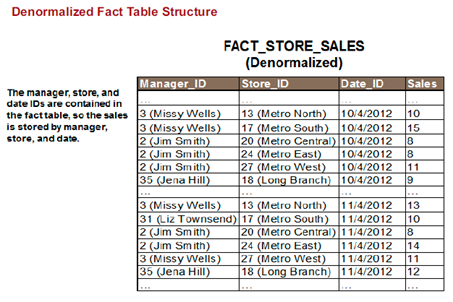 My Notes :
The fact table will be larger especially in data volume.
...