Wikipedia
Network-attached storage (NAS) is file-level computer data storage server connected to a computer network providing data access to a heterogeneous group of clients. NAS not only operates as a file server, but is specialized for this task either by its hardware, software, or configuration of those elements. NAS is often manufactured as a computer appliance – a specialized computer built from the ground up for storing and serving files – rather than simply a general purpose computer being used for the role.

Wikipedia
A storage area network (SAN) is a dedicated network that provides access to consolidated, block level data storage. SANs are primarily used to enhance storage devices, such as disk arrays, tape libraries, and optical jukeboxes, accessible to servers so that the devices appear like locally attached devices to the operating system. A SAN typically has its own network of storage devices that are generally not accessible through the local area network (LAN) by other devices. The cost and complexity of SANs dropped in the early 2000s to levels allowing wider adoption across both enterprise and small to medium sized business environments.

A SAN does not provide file abstraction, only block-level operations. However, file systems built on top of SANs do provide file-level access, and are known as SAN filesystems or shared disk file systems.

Ecei
Storage Area Networks or sometimes referred to as SAN, are a separate computer network typically based on a fabric of fiber channel switches and hubs, connecting storage subsystems to a heterogeneous set of servers on an any-server-to-any-server basis. A SAN enables direct storage-to-storage interconnectivity and lends itself to taking advantage of new types of clustering technology. 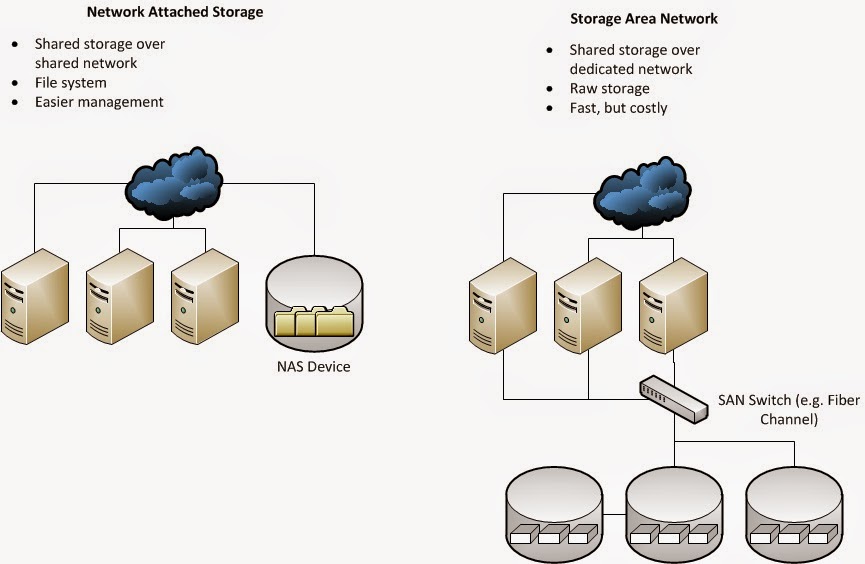 About
The administrator of a home or small business network can connect one NAS device to their LAN. The NAS maintains its own IP address comparable to computer and other TCP/IP devices. Using a software program that normally is provided together with the NAS hardware, a network administrator can set up automatic or manual backups and file copies between the NAS and all other connected devices. The NAS holds many gigabytes of data, up to a few terabytes. Administrators add more storage capacity to their network by installing additional NAS devices, although each NAS operates independently.

Administrators of larger enterprise networks may require many terabytes of centralized file storage or very high-speed file transfer operations. Where installing an army of many NAS devices is not a practical option, administrators can instead install a single SAN containing a high-performance disk array to provide the needed scalability and performance. Administrators require specialized knowledge and training to configure and maintain SANs.
Posted by NBD at 8:25 AM