The Waterfall Model was first Process Model to be introduced. It is also referred to as a linear-sequential life cycle model. It is very simple to understand and use. In a waterfall model, each phase must be completed before the next phase can begin and there is no overlapping in the phases.

Waterfall development isn't new -- it's been around since 1970 -- but most developers still only have a vague idea of what it means. Essentially, it's a framework for software development in which development proceeds sequentially through a series of phases, starting with system requirements analysis and leading up to product release and maintenance.

Waterfall approach was first SDLC Model to be used widely in Software Engineering to ensure success of the project. In "The Waterfall" approach, the whole process of software development is divided into separate phases. In Waterfall model, typically, the outcome of one phase acts as the input for the next phase sequentially. 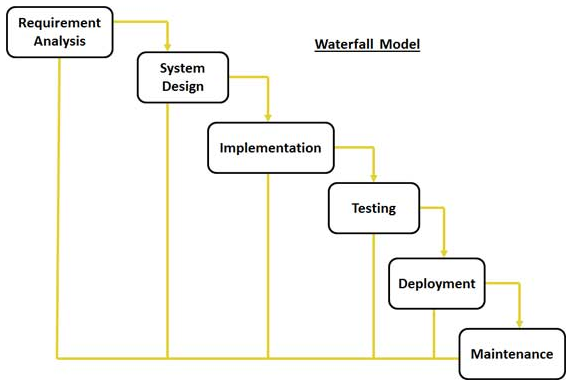 The sequential phases in Waterfall model are:

1. Requirement Gathering and analysis: All possible requirements of the system to be developed are captured in this phase and documented in a requirement specification doc.

This first step is also the most important, because it involves gathering information about what the customer needs and defining, in the clearest possible terms, the problem that the product is expected to solve. Analysis includes understanding the customer's business context and constraints, the functions the product must perform, the performance levels it must adhere to, and the external systems it must be compatible with.

It involves defining the hardware and software architecture, specifying performance and security parameters, designing data storage containers and constraints, choosing the IDE and programming language, and indicating strategies to deal with issues such as exception handling, resource management and interface connectivity.

3. Implementation: With inputs from system design, the system is first developed in small programs called units, which are integrated in the next phase. Each unit is developed and tested for its functionality which is referred to as Unit Testing.

This step consists of actually constructing the product as per the design specification(s) developed in the previous step. Typically, this step is performed by a development team consisting of programmers, interface designers and other specialists, using tools such as compilers, debuggers, interpreters and media editors.

4. Integration and Testing: All the units developed in the implementation phase are integrated into a system after testing of each unit. Post integration the entire system is tested for any faults and failures.
An independent quality assurance team defines "test cases" to evaluate whether the product fully or partially satisfies the requirements outlined in the first step. Three types of testing typically take place: unit testing of individual code modules; system testing of the integrated product; and acceptance testing, formally conducted by or on behalf of the customer.

5. Deployment of system: Once the functional and non functional testing is done, the product is deployed in the customer environment or released into the market.

Delivery may take place via the Internet or physical media, and the deliverable is typically tagged with a formal revision number to facilitate updates at a later date.

6. Maintenance: There are some issues which come up in the client environment. To fix those issues patches are released. Also to enhance the product some better versions are released. Maintenance is done to deliver these changes in the customer environment.
These modifications arise either due to change requests initiated by the customer, or defects uncovered during live use of the system.

All these phases are cascaded to each other in which progress is seen as flowing steadily downwards (like a waterfall) through the phases. The next phase is started only after the defined set of goals are achieved for previous phase and it is signed off, so the name "Waterfall Model". In this model phases do not overlap.

#Waterfall Model Application
Every software developed is different and requires a suitable SDLC approach to be followed based on the internal and external factors. Some situations where the use of Waterfall model is most appropriate are:
#Pros And Cons 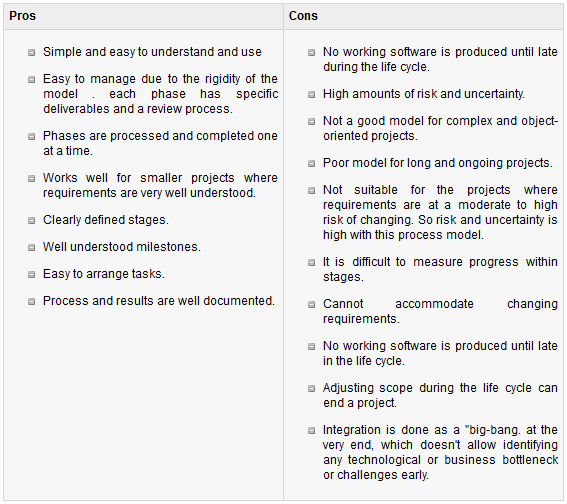